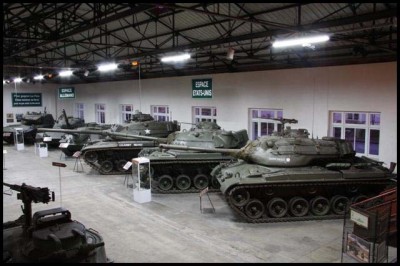 Only the post-World War II armored cars are classified in the museum as the first versions of material still in use.

Since the Soviet machines are grouped together in all generations, there is no room in this room where, without being delimited, there can be discerned four groups: English, American and German productions of various origins.

Great Britain is represented by three heavy tanks, the most interesting of which is the enormous Conqueror of 66 t, carrying a powerful artillery of 120 mm. Dating back to 1954, which was about contemporary with the AMX 50, it was designed for the same reasons and had the same defects. Weighed down by its armor of 300 mm, it was under motorized. Moreover, its mass and dimensions prohibited all railway transport while its autonomy was limited to 175 km at about 30 kilometers per hour. He had no follow-up.

Classified as a medium tank with its 52 t, the centurion, entered into service in 1949, resulted from a study completed in the final months of the war. His successor was the Chieftain, of an equivalent tonnage, declassified today by the Challenger I and II. The museum expects to receive a copy of this type but this tank uses a composite armor - the Chobahm - whose composition is always kept secret. We must therefore wait for a hypothetical declassification.

The American representation is also very rich with machines of little originality because having all served in the forces of the NATO, including France. Both Patton M. 47 and 48 are present as well as the Pershing, the veteran of this collection since entered in service in February 1945. It is true that it was still in service 25 years later.

The Patton, which became NATO standard tanks, were revolutionary when commissioned. By their hydraulic clutches and directional systems as well as by their modern sighting means, telemetry by stereoscopic vision.

One Mr. 60 was missing. He arrived, in perfect working condition, from ... the US Air Force! This is what decided his choice because, assigned to the anti-terrorist defense of the American air bases in Germany, it has very little rolled. Armed with a 105 mm gun with a firing stabilization device and a laser sight, this 52 shield has been produced at about 13 000 exemplars.

Another interesting piece, the 41 Walker Bulldog lightweight tank, is the worthy successor of the Chaffee which he has to mobility (over 23,5 km hour) thanks to an 70 horsepower engine.

The German presence is impressive with the two very classical Leopards I and II, but also the much more original Jagdpanzer-Kanone heir to the tank fighters of the Second World War. It should be noted that the Germans would have been the only ones to cultivate this armored formula in recent years. With its low body and long barrel of 90 mm, this machine has the physics of its use: it is imagined very well in ambush, lurking in a grove.

The museum is also awaiting a Guepard, another derivative of the Leopard I, equipped with an antiaircraft twin-tube 35 mm - which can also be used in anti-tank - and surveillance and acquisition radar. This material was used in the 80 years by Germany, Holland and Belgium.

Alongside these prominent vehicles are more exotic tanks, very often light vehicles: the Canadian Lynx; the American Mr. 114; the Brazilian Cascavel, the Dutch DAF YP 408; the British Alvis Saracen and an original troop transport version of the Panhard EBS, which only the Portuguese commanded.

Besides the PZ 61 Switzerland, the most classic, the Swedish STRV 103 S shows the influence of a very particular environment on the design of a combat engine.