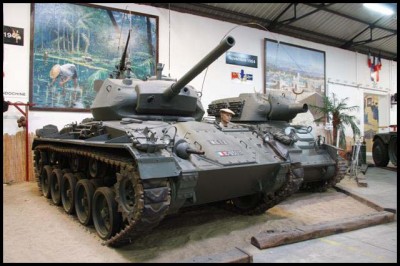 France has barely emerged from the European conflict when it finds itself engaged in a new war in Indochina. Of course, the only material available is American, and yet it does not cover that the need for this particular theater of operations .

The extent of wetlands, especially rice paddies, leads to the acquisition of amphibious US means immense stocks exist since the end of the conflict in the Pacific. The main ones of these materials are present in the collections of the museum.

The small Mr. 29 C.Crabe played the role of a midship vehicle, however with modest performance (40 km on land, 6 km on water with 4 to 6 people on board).

the landing vehicle LTV 4 alligator is much more spectacular. It originates in the floods of the Mississippi when the breeders were to go and recover their isolated cattle. Thanks to the rent of which it is equipped, it can disembark lightweight rolling stock, Jeep or Half-Track and their crews. slightly armored (from six to 13 mm), it is armed with four machine guns. The bucket-shaped reliefs of its caterpillars were sufficient to propel it on water at 12 km / hour, the road speed being about double.

As a purely terrestrial material, the French army used:

- the famous Jeep (which takes its name from the initials of its mission: GP for General Purpose or phonetically Dji Pi) so that unshielded is unavoidable;
- the M8 howitzer;
- the not less famous Half-Track;
- the M24 Chaffee light tank.

The Half Track will suffer on the ground, numerous shielding changes (seven to 13 mm originally, and arming.

The Chaffee, which leaves to its users the memory of a machine flexible and effective, knew an unusual adventure at the siege of Dien-Bien-Phu. The M24s were partially dismantled, embarked in cargo planes, which disembarked them on the runway of the entrenched camp. There, mechanics reassembled them and they were used as mobile casemate.

Some of these materials were found a few years later engaged in law enforcement operations in Algeria and were soon reinforced by the exceptional modern French equipment, Panhard armored reconnaissance vehicle (EBR).