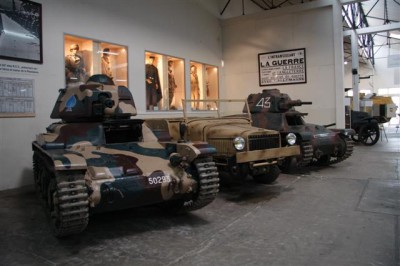 The rapid defeat of the French armies in May and June 1940 cast suspicion on the combativity of the men and the qualities of their equipment.

The armored army did not escape its lapidary judgments, carried without discrimination in the emotion of defeat. History has to be given time to write and allow one to step back in order to judge.

In spite of the efforts of certain clairvoyant officers whose Colonel De Gaulle and the generals Flavigny and Delestraint France entered the war in 1939 under the orders of generals always blinded by the victory of 1918 and deaf to the warnings of recent events.

At mobilization, the French armored potential is still mainly scattered in support of the infantry corps. As in 1917 mechanized divisions are just beginning to be formed, in the light of the invasion of Poland by the hordes of panzers hurrying down in tight rows and overturning everything in their path.

In the room Campaign of France 1940 one can see the tanks :