Leopard I and II tanks 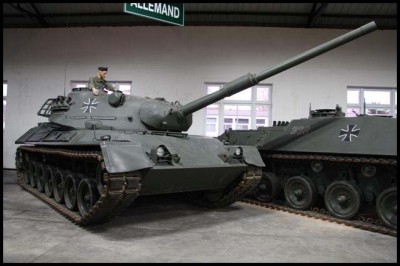 In 1956, the Bundeswehr initiates a process to acquire a modern battle tank in replacement of its US armored equipment (M-47 and M-48) in order to take advantage of the shielding and firepower faced with the numerical superiority of the Soviet armored vehicles.

The resulting specifications stipulate that the shielding must withstand 20 mm shooting at short range, have a barrel capable of piercing 150 mm shielding with an ammunition endowment according to the NATO standard.

At the beginning of the 1970 years, following the abandonment of the German-American MBT-70 program (originally intended to provide both countries with a common assault tank platform), West Germany, replace the Leopard 1, asks the Porsche, Krauss-Maffei and Wegmann groups to work on the project. 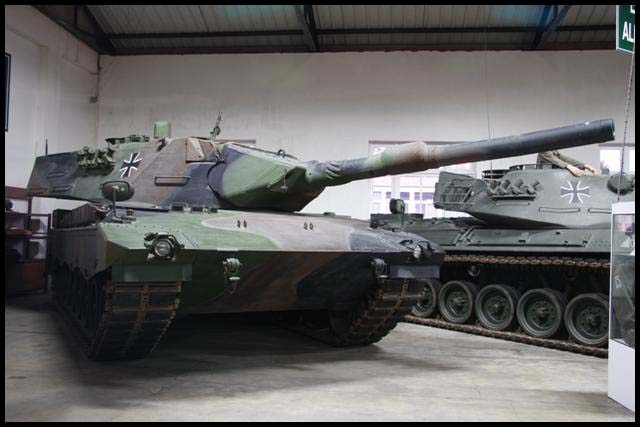 The starting points will be the Keiler prototype and the MBT-70 program. The engine, the track and the bearing system will be taken from the MBT-70 and the general architecture of the Keiler. The only question that arises is the caliber of the barrel (105 mm or 120 mm). From 1972 to 1976, several prototypes are built in different configurations, 17 in total, plus 2 versions called AV aimed at the project of the American M1 for unification of the elements (turret with composite shielding, reinforcement of the suspension, telemeter laser and non-optical). After completion of the tests, the AV version is retained (with its non-composite but perforated shield) and serves as the basis for production by Krauss-Maffei and Mak companies in eight batches (2 950 tanks constructed between 1979 and 1992).

In 1988, a modernization program was put in place to give birth to the A5 version: displacement of the sight of the tank commander, increase of the armor on the front of the turret and on the undercarriage, a thermal camera for the commander (the shooter already had one, which could be copied for the commander), GPS / inertial navigation system. On the A6 version, the 120 mm L / 44 barrel is replaced by the longer Rheinmetall 120 mm L / 55 version. NBC capacity, night vision.