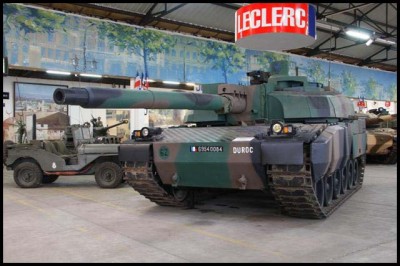 The Leclerc tank is a French tank, manufactured by Nexter (formerly Giat Industries) in Roanne in the Loire. It was so named in honor of Marshal Leclerc.

In spite of its difficult beginnings and its very long development, it has become one of the most modern and efficient tanks in the world at present becoming the only heavy tank of armored cavalry, allowing France and its customers to ensure the replacement of the aging AMX-30.

The Leclerc remains rather classic, in the overall layout, however, it presents technological innovations enabling it to remain comparatively smaller and very manageable compared to its main competitors.

By its design date, the Leclerc tank has 10 years ahead of all its competitors in service in the NATO countries. In fact, today it is the only third-generation tank, which is more a weapon system than a conventional one.

The Leclerc has as many electronic computers as a combat helicopter, which gives it unmatched performance: it can be fired by day and night, on a target that is in motion and at a cadence, one shot every 6 seconds.

It is also the only tank directly designed for the digitized battlefield. With its optimized armor, agility and maneuverability, it is a conventional deterrent that can be adapted to any type of mission, from battle to movement to peacekeeping, as in Kosovo and Lebanon.

780 battle tanks have been delivered to date. The Leclerc system includes the battle tank proper and a convenience store which ensures its support in the immediate vicinity of a combat zone.