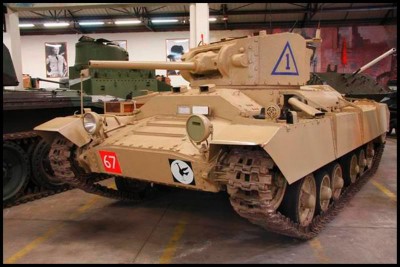 The file of the project of new chariot of accompanying of the infantry was proposed to the ministry of the British War in 1938, on the day of the Valentine's Day. He was baptized Valentine!

Like all British tanks of that time, it was not an extraordinary machine although the 3700 units of several versions were built. The Free French used it in Africa and the Russians on the eastern front.

The caliber of the barrels varied from 40 to 75 mm depending on the version. A diesel 140 horsepower propelled it to less than 25 km / h.

Based on the Cruiser Mk II tank, the Valentine was designed by the Vickers-Armstrong company and proposed to the Ministry of War in February 1938. Its designers had tried to combine the weight of a Cruiser tank (so that it could reuse the suspensions and elements of the transmission) with the armor of an infantry tank, which produced a small vehicle with a cramped interior and a turret served by two men.

Although its engine is weaker than that of the Matilda tank, due to its lighter armor it had the same top speed and was much easier and cheaper to produce.