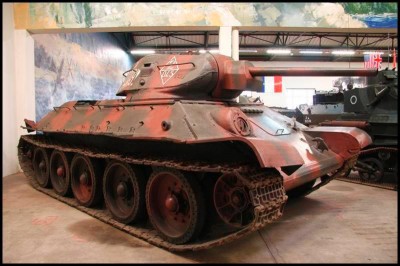 It can be said of this tank that it traumatized the Germans when it made its appearance during the counter-offensives of the winter 1941-1942, before Moscow.

Studied on the specialties of the climate and the Russian topography, he spent his time in the snow and mud where the Panzers got bogged down. Its diesel engine started in a quarter turn while the Werhmacht used a precious fuel by running its gasoline engines for nights.

Never had the chrome-plated breech of these guns frozen. This first version of 32 tons, armed with a 76,2 mm gun and two machine guns, was shielded only at 60 mm and was replaced from 1943 by the T34-85.