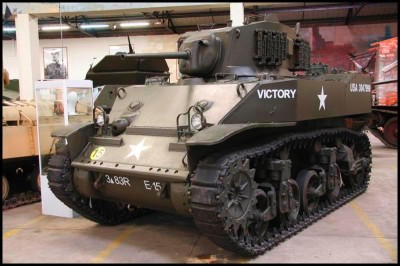 If its name suggests a British origin, the Stuartest makes a light American tank of 13 tons which knew its hour of glory during the two battles of El Alamein, in June and October 1942.

However, with its 30 mm gun, these 7,62 mm machine guns and its 38 mm armor, this small machine, with a small weight in front of Rommel 's Panzer III and IV, was able to play an effective role in the harassment of the " infantry.

The Stuart also fought in Europe, the Balkans and the Pacific. Its continental 250 horsepower engine allowed it to travel 250 km to 60 km hour.