the Matilda MK I and II tank 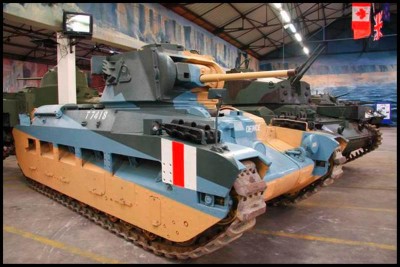 It was a trendy song across the Channel in 1940: "Walzing Matilda," extrapolated to the musette swaying on the hips of English railwaymen when they walked. And, as these tanks had a very supple suspension, they were baptized Matilda!

Another legend tells that this tank was called Matilda by the Australian troops arriving in Egypt in 1942: The sound of the caterpillars on the loose soil reminded them of the rhythm of the same song "Waltzing Matil" written in the XIX century by the Australian poet Henry Lawson .

They were infantry machines which participated flax in the campaign of France, the other to that of Libya. The copy of the museum is a Mark II, armed with a barrel of 40 mm and a machine gun. Speed ​​of 25 km hour on 150 km thanks to two engines of 95 horses.

The Matilda is a tank of 24 tons whose production began in 1937 in foundries Vulcan. No less 2987 tanks come out of these foundries until August 1943, date of production stop.

Up to 1941 it is the most armored tank in service, but this shielding is possible at the expense of the mobility of the machine. Its 40 mm cannon does not make it the most powerful tank of that time.

He was very present in North Africa in particular. The second battle of El Alamein, in October 1942, sounded the end of its use as an assault tank. Copies were given to Russia.

It was in fact converted into a lighting chariot.