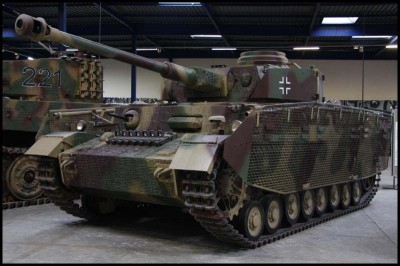 The Panzerkampfwagen IV (PzKpfw IV), often called Panzer IV was an assault tank used by Germany during the Second World War. Originally designed as a fire support tank, with a short 75 mm gun, for the Panzerkampfwagen III, it eventually replaced the latter when the allied tanks became too protected for it. Re-equipped with a long anti-tank gun, the PzKpfw IV became the main German tank during the second part of the war, produced more than nine thousand copies, and produced numerous derivatives.

After 470, a major change took place in the tank by replacing the 1942 KwK 37 in March with the 7.5cm Kw.K.40 L / 43, giving birth to the Ausf F2, the first variant of the Panzer IV, built to serve as a main battle tank. The origin of this modification is the appearance of the Soviet tanks T-34 and KV1, which even the last guns of 50 mm, Panzerkampfwagen III can not pierce efficiently. The new cannon mounted on the Panzer IV is capable. With normal perforating ammunition, with an initial velocity of 740 m / s, it can penetrate a thick armor of 89 mm, even if it is inclined to 30 °.