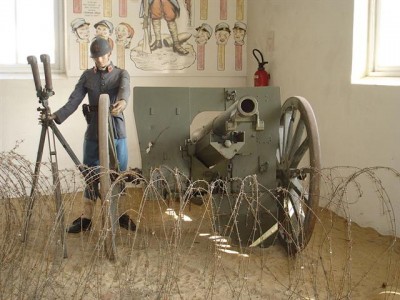 The 75 mm cannon is a field artillery piece of the French Army, which is one of the most famous canons of all time.

It is a revolutionary concept for its time and encompasses all the latest improvements in artillery at the end of the 19th century, namely: the use of smokeless powder, cartridgeed ammunition, fired shells, loading by the cylinder head according to the Nordenfelt process, and a hydropneumatic recoil brake.

This synthesis, by eliminating the effects of recoil, finally made possible an old dream of artillerymen, rapid fire. It is because of its characteristics that it was nicknamed the king cannon.

Becoming an emblem of French military power, soon known as the seventy-five, or even our glorious seventy-five, it is the object of a cult of the French soldiers and patriots, who see in him a miracle solution to any problem .

This enthusiasm will lead to neglect, among others, the modernization of heavy artillery, a mistake that will be severely paid during the First World War. Indeed if the 75 is the best field gun of the time, it is much less comfortable and useful in a war of position, where one needs heavy artillery, to reach the entrenched troops. He will nevertheless be glorious, but largely thanks to his servants who will pay a heavy price.

Still in service in large numbers in the French army of 1940, this time it proved outdated in the war of movement, for it had been late to make it fit for the automobile traction, now necessary. He will, however, have a second youth as an anti-tank piece in the hands of the Wehrmacht and the free French forces.