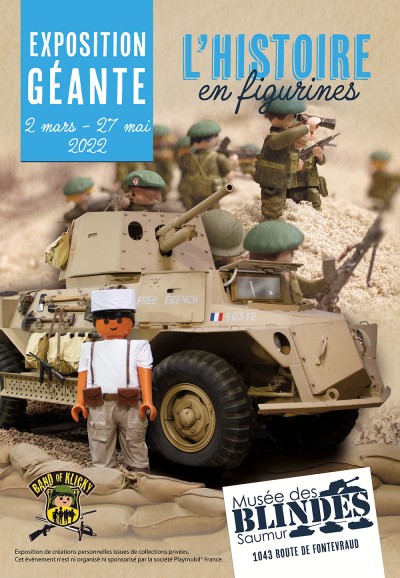 From March 2 to May 27, the Armored Museum welcomes more than a thousand Playmobil figurines© adapted by the Band of Klicky Association. Children and adults will be able to discover the decisive moments of the last two world conflicts thanks to giant stagings.

More than a thousand Playmobil© personalized recreate 100 years of history!

Playmobil© of the Band of Klicky association invite themselves into all the rooms of the museum. 18 historical scenes take visitors through a century of history, from the First World War to the Gulf War. The Second World War is particularly represented with the great victories of the Allies, in France, in Africa, in Russia but also in the Pacific.

Each of the scenarios is made up of figurines, but also vehicles and buildings, all to scale. Each diorama will be adapted to the room that hosts it and to the armored vehicles that surround it. Figurines and historic vehicles thus dialogue throughout the exhibition. The Allies of the Second World War room offers, for example, a reproduction of the Normandy landings.

While large epic battles are re-enacted, smaller presentations offer spotlights on particular moments. You will thus be able to find a slice of life of a certain Alexis Moncorgé, alias Jean Gabin. This one took part in the Liberation of France in a tank in 1944. His character, adapted from a Playmobil©, will be at the center of a small diorama.

Band of Klicky, an association of enthusiasts behind the exhibition

10 years ago, in 2012, an exhibition of Playmobil© caused a great stir in Saumur. During this event, a handful of enthusiasts reproduced the Normandy landings. 10 years later, united within the Band of Klicky association, they exhibited again in Saumur, at the Musée des Blindés.

The gigantic army of figurines mobilized for the exhibition comes from the collections of a dozen exhibitors. These Playmobil enthusiasts© and History want above all to present our past in an educational way, for young and old.

These collectors are also painters and sculptors of figurines. Playmobil© depicting contemporary conflicts have never been marketed. It is therefore necessary to patiently adapt the small characters, print new poses in 3d, sculpt or mold various accessories...