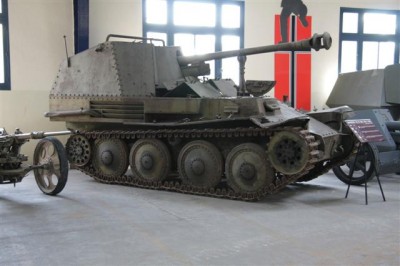 During the 1941 summer, the German anti-tank gun PAK 50 proved totally ineffective against the Russian T34 appearing in large numbers. The Wehrmacht therefore needed rapidly more powerful self-propelled artillery, the experiment was made to mount a captured Russian 76,2 mm gun on a Panzer II chassis.

The Marder thus creates itself very effective and, as soon as 1942, other hybrid anti-tank motorists are assembled in series, mostly from recovered materials. There are of course old-fashioned Panzers chassis but especially many Skoda tanks, Hotchkiss, Lorraine chenilletes, with 75 or 76,2 cannons mounted in a casemate.